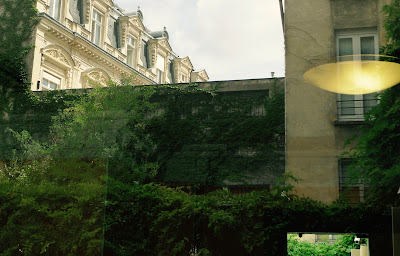 The day after I arrived, Aunt Mill woke me at seven Paris time.  I’d been asleep about five seconds.  She said she was taking me to her school to do some testing.  I had three seconds to shower and throw clothes on.  The shower had one of those nozzle heaters that either scalds you or douses you with ice water, with no in between, unless you have the touch of a safecracker.  Then we sat down to warm milk laced with coffee, and yesterday’s stale baguette with jam.  Aunt Mill smoked half a cig by the open kitchen window, telling me what a disgusting habit it was the whole time.
I borrowed an umbrella for the dash to the Metro.  Aunt Mill has a dozen in a brass holder by her door—a good thing because it is always raining in Paris, always.  It was dark outside.  The wet cobbles glistened under vapor lights.  People walked hunched over and dragged on their cigarettes and bumped you off the sidewalk as they passed.
Aunt Mill handed me a Metro ticket and we clunked through the turn-styles and mashed into the morning crowd.  I had no idea where we were going but it was pretty cool to be on the Metro even if everyone was surly and preoccupied.  Aunt Mill poured out a stream of information—“this is the Filles du Calvaire stop on the number eight, Balard to Creteil line; the Daughters of Calvary were a Benedictine order; it is a direct shot to Madeleine, or ‘la Madeleine’ and right near the Embassy School; it is a pleasant walk on a nice day; you can get anywhere on the Metro once you learned the system; don’t try and jump the turnstiles even if you see other kids doing it; watch out for pick-pockets but otherwise you’re safe; la Madeleine was built on the site of a synagogue seized by the Bishop of Sully in 1182; it holds down the north end of the cross formed by the Louvre, Arc de Triomple, and National Assembly; Louis XVI was buried there for awhile after his head got cut off; the man in the green knit cap, outside the Quatre Septembre stop, sells the best roasted chestnuts in Paris; Napoleon wanted to make la Madeleine a temple for his Grand Army; perfectly roasted, warm chestnuts are one of the true delights of Paris in the winter; the Madeleine was copied after a Roman Temple in Nîmes; the most fashionable weddings in Paris are held there and the restaurant under the church isn’t bad either—I felt like I was an overflowing bucket by the time we chuffed up the stairs, out of the Metro, and snapped our umbrellas up again.
We entered the Embassy School through a nondescript archway that led to a courtyard.  It was unmarked except for a tiny brass sign.  A guard sat in a box in the courtyard and buzzed everyone through glass doors.  A few early kids, dressed in school blazers, Oxfordy shirts, and blue jeans or gray skirts, said hello to “Madame Millicent” as we came in.  They eyed me discreetly, with bored curiosity, looking posh and smug.
I got whisked into a cubical with a glass wall and four computers, just inside the bureau directeur while Aunt Mill talked for a long time with a Mademoiselle Villand, a young woman with curly blond hair and a cherub face who, despite her sweet appearance, could roast you alive with her booming shout.  She used her sweet voice with me but the one she used on kids running in the hall made me cringe next time she approached.
Aunt Mill went off to teach.  Mademoiselle Villand set me up to take tests on a computer.  It was pretty weird cause the keyboard was different than an American keyboard, but luckily it was just scroll and click and fill in A, B, C, D or E for the tests.  They were basically the same hyper-boring, fill-in-the-bubble tests that we take back home, except the computer would lock you out when your time was up.  I had a headache three minutes in.
Mademoiselle Villand came in once in awhile and checked that I had a pulse, and also to set up the next torture session.  Normally I would have thrown myself out a window, but I was so jet-lagged I just zombied through.  At noon, Aunt Mill and I walked around the corner to a tiny café where she had a ten minute chat in French with the guy who ran the place.  Aunt Mill tends to have chats with the owners of every café we go into.  She seems to know every café owner in Paris.
After lunch it was more of the same torture.  They even gave me a French test, which was like gambling—I had a one in five chance of guessing right.  Then I sat waiting for Aunt Mill, watching the rain stop and start, watching the lead-colored daylight disappear, watching knots of students traipsing out, gabbing in French and English and even Japanese.
I must have fallen dead asleep.  Aunt Mill woke me and apologized for being so long and asked if I wanted to grab a bite of dinner.  I sat up from the bench in the principal’s office or bureau directeur or whatever and had to think for a few seconds about where I was.
Prev Next
Follow Me: 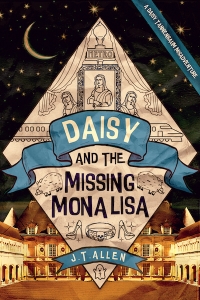